Jim Post was one of the most unstoppable stars of the Chicago folk music scene in the 1970s and 1980s.

He could sing, act, write a hit song and plays, make you believe he was the reincarnation of Mark Twain, smash his guitar and hit, and endlessly sustain, the high notes with a resonant tenor that would give you goosebumps.

“He was a lovable little devil on stage,” said stage producer Richard Friedman, a longtime friend. “He would do anything to entertain.”

At the end of his shows, he would tell the audience, “If you keep coming back to see me, I’ll never get a real job.”

“He told his life story at just about any show,” said musician Randy Sabien, who toured the country and Canada with him.

When the singer first approached him about working together, “he blew up in the dressing room,” Sabien said. “That’s how Jim Post would walk into any room.”

Mr. Post, 82, died of heart failure on September 14 while in a hospice in Dubuque, Iowa, according to his friend Bob Postel, who said he had been in poor health for two years. 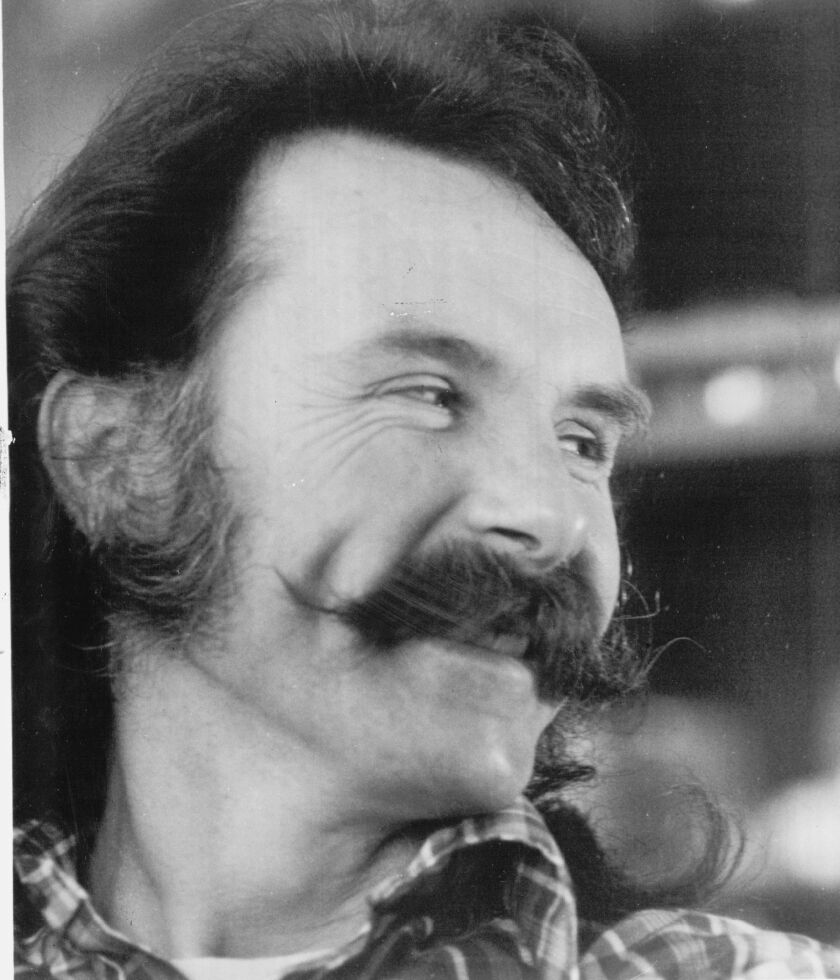 Jim Post’s mustache became as much a trademark of the artist as the way he could seemingly sustain a high note endlessly.

He made more than 20 records, most of them solo, but one was recorded with his first wife Cathy Post as Friend & Lover, in 1967, for which he wrote his smash hit “Reach Out of the Darkness.”

Produced by Joe South and Bill Lowery, its heartfelt, flowery lyrics have been used endlessly ever since on television soundtracks and in commercials to conjure up the ’60s.

“Mad Men” featured the song in its season 6 episode “Man With a Plan.” Its upbeat refrain—”I think it’s so wonderful now that people are finally coming together”—was used to jarring effect as the show ended with the assassination of Robert F. Kennedy.

It was also sampled on “People Come Together” by the Len group in the 2003 Steve Martin-Bonnie Hunt film “Cheaper by the Dozen.”

“Jim told me that he came up with the idea for the song when he was at a festival, he was walking through the crowd and he heard a guy say, ‘You know, it’s great now that people are starting to get together,'” said Lilli Kuzma, presenter. of “Folk Festival” on Glen Ellyn public radio station WDCB-FM.

The album cover and 45 say: “Reach Out of darkness.” But Friedman said the duo sang: “Reach Out in Darkness.”

“The record company blew it,” Friedman said. “They gave it the wrong name, and that became the name that stuck.” 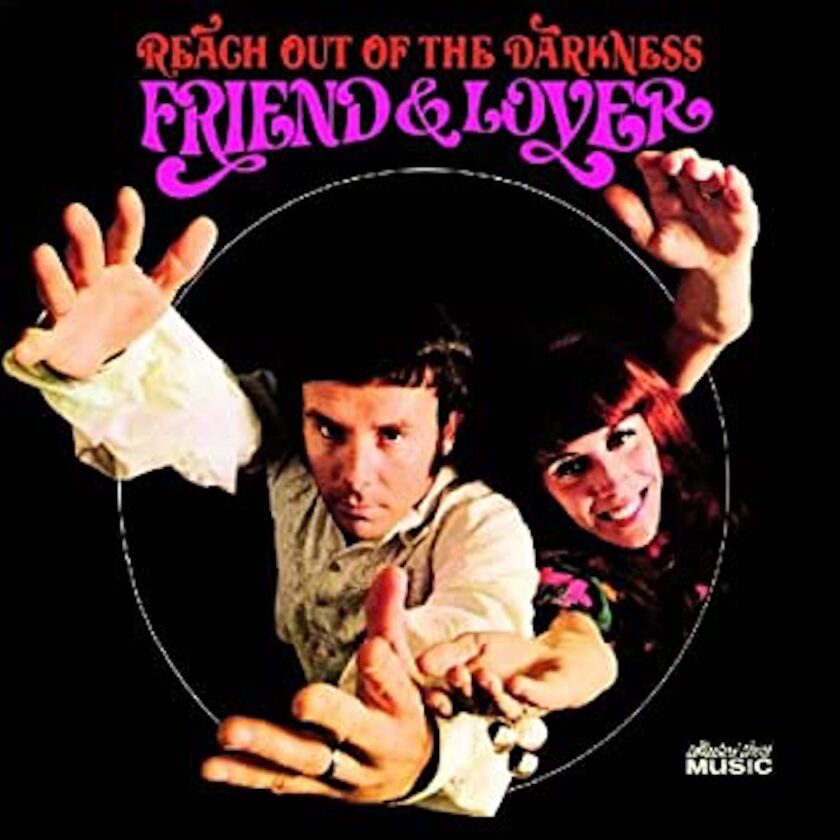 “He could go to the mailbox once or twice a year and get a big reward from that song,” Sabien said.

The song has been performed nearly 1.9 million times on US radio, according to Broadcast Music, Inc., a company that manages songwriters’ rights and royalties.

Before forming Friend & Lover, Post played in Chicago with the Rumrunners, a group similar to the Kingston Trio, singer-songwriter Ed Holstein said.

He lived at various times in Chicago, San Francisco, a converted one-room schoolhouse in Stoughton, Wisconsin, and Galena, among other places.

Friends say he also spoke of having a brief meeting in California with Charles Manson, when Manson was trying to break into music. 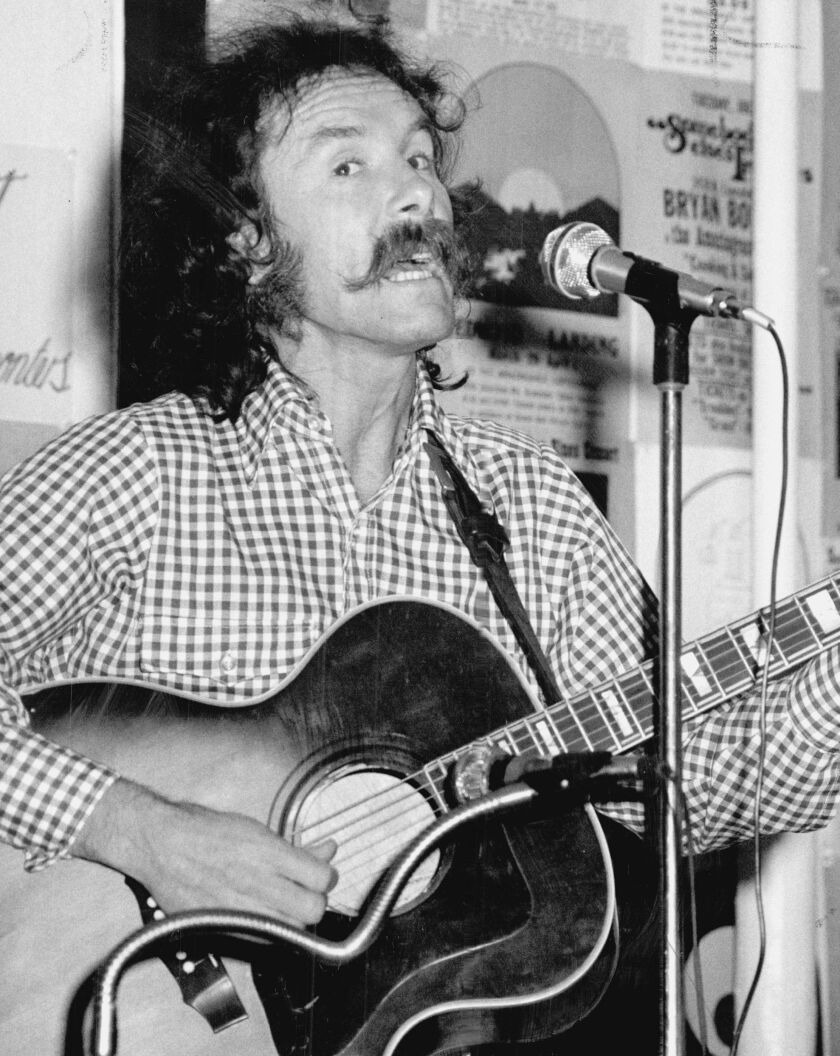 Jim Post often appeared at the Old Town School of Folk Music and the Earl of Old Town.

He performed regularly at venues such as the Earl of Old Town, the Old Town School of Folk Music, Harry Hope’s in Cary and the Amazingrace in Evanston, where, in 1978, he closed the venue and played the last club show alongside Goodman, Tom Dundee and Corky. Siegel, the harmonic and piano leader of Corky Siegel’s Chamber Blues.

Onstage, Siegel said, “He was a savage. He was my favourite. I think he was just the greatest on the Chicago folk scene.”

“He was a consummate artist,” said Ed Holstein. “His energy from him was limitless.”

“He always performed with great enthusiasm and hit high notes that few could reach,” Koloc said. “Jim made a lot of people enjoy himself over a long career.” 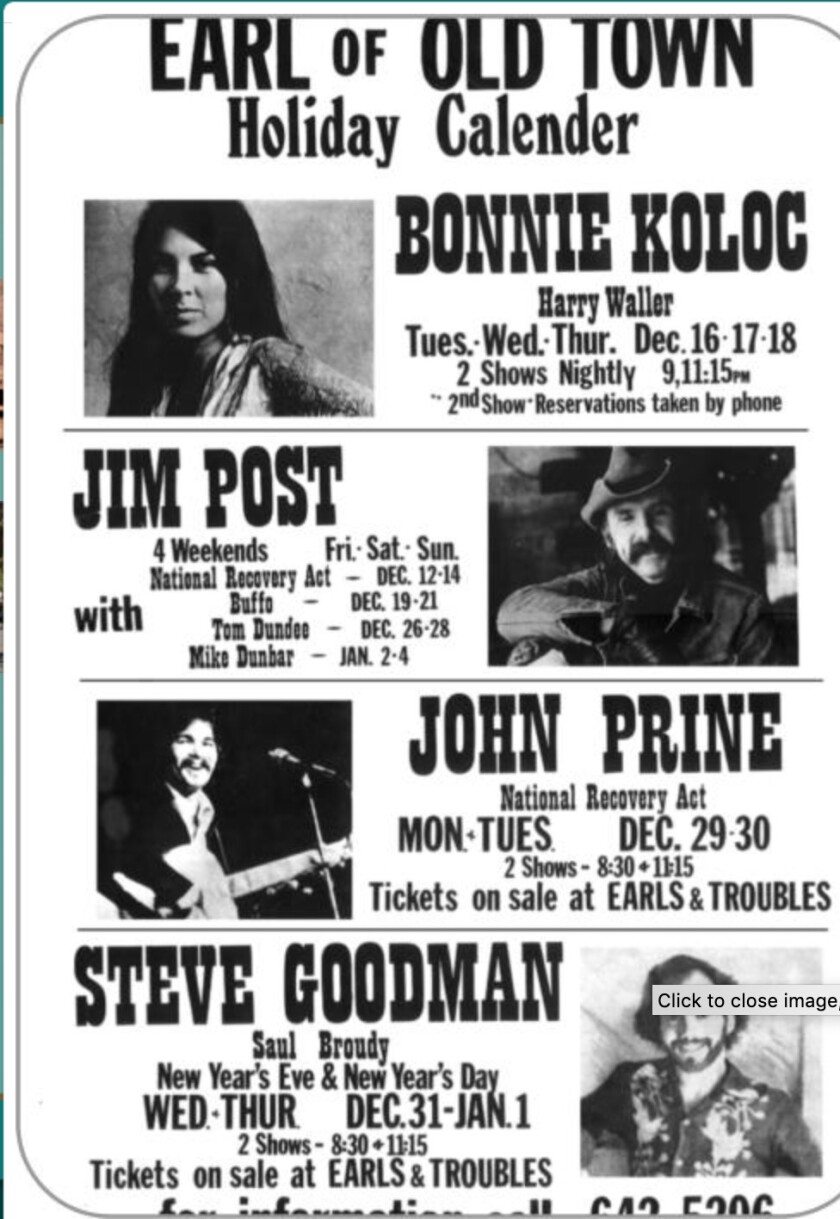 Bonnie Koloc, Jim Post, John Prine and Steve Goodman, four of the biggest names in the heyday of Chicago folk music, played one year after another at the Earl of Old Town.

And he could talk about a piece of furniture on stage and make it “incredibly funny,” Sabien said.

Young Jim grew up on a farm in Harris County, Texas, about 20 miles from Houston amid “pine forests and mulberry thickets,” he once said. Although his father only had a third-grade education, Mr. Post wrote of how the elderly James Post would seduce the future singer’s mother with extemporaneous poetry:

“Driving down the road. . . with her family with their elbow out the window, her thoughts wandering, he would start talking to mom. That’s when the god of poetry hit him and my mother’s heart raced like a teenager’s. ‘Oh, James,’ she said, ‘you talk like a poet.’ And he’d be like, ‘Ollie, don’t make fun of me,’ and she’d slide down into the seat without her belt and whisper in his ear and rest her head on her shoulder. He loved her so much that he let her tell him when he could go dancing with whiskey.”

Even as a young boy, Jim Post’s talent was evident.

“I was born with a range of 3 ½ octaves,” he said in a 1972 interview with the Chicago Sun-Times. “I was a pretty successful evangelistic singer, playing in over 500 churches across the country until I was 22 years old.”

In another interview with the Sun-Times, he said, “I learned to sing as a Southern Baptist. My mother was a singer, alone in the house but with a voice as big as Mahalia Jackson’s. She sang doing housework, with tears in her eyes, listening to some silly preacher on the radio. And me milking cows about 1,200 yards down the line, singing harmony.”

In first grade, he won a school-wide talent show and landed a radio performance.

“The adoration he received from his schoolmates upon returning to school shaped his life,” according to a biography of one of his works.

For about 40 years, he lived in Galena, which inspired him to write his first one-man play, “Galena Rose: How Whiskey Won the West.” After a period at the Civic Theater at the Lyric Opera House, he entered the Organic Theater Company and got a booking there. He was so successful that he was moved to the main stage, Friedman said. 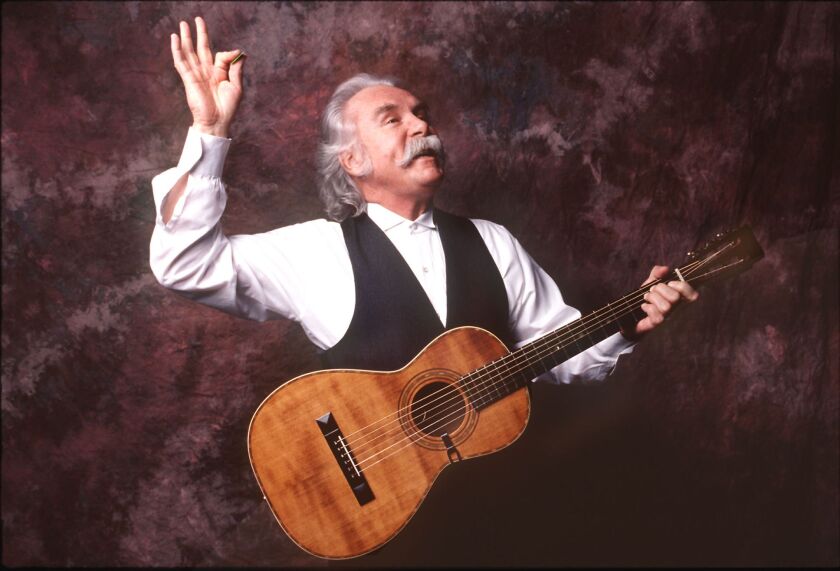 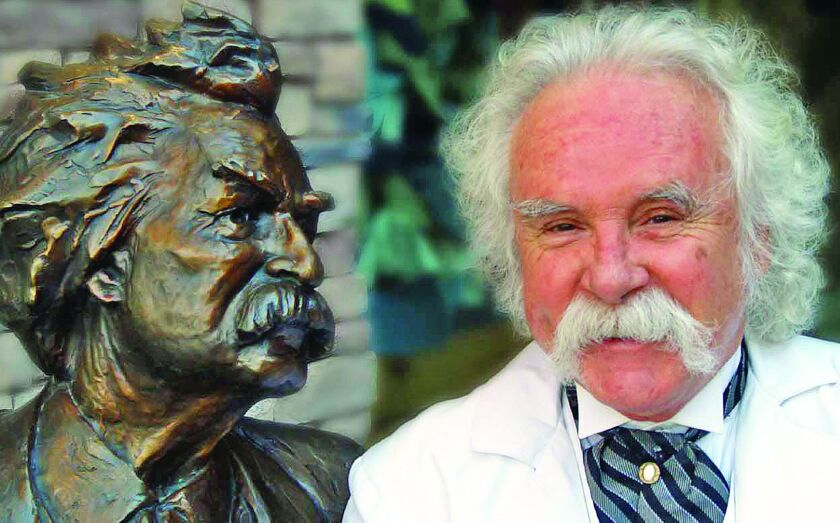 Jim Post, seen here in 1996, began playing Mark Twain after many of his fans told the singer he resembled the great American humorist.

Proclaimed composer and Galena laureate, Mr. Post reinvented himself in the later years of his career playing Twain on stage. He fused his original songs with the comedian’s own words in two one-man musicals he wrote and performed: “Mark Twain and the Laughing River” and “Mark Twain’s Adventures Out West.”

He performed the plays thousands of times at venues including the Smithsonian Institution, the Guthrie Theater in Minneapolis, and the English Theater in Vienna in Austria.

His song “Mighty Big River,” from “Mark Twain and the Laughing River.” He appeared in the 2002 Ken Burns film “Mark Twain.”

Mr. Post was always at home on stage. Once, seeing a friend from Chicago in the audience while he was performing in Jackson, Wyoming, he did a double take but never broke Twain’s character.

“I know you,” he said. “You’re a silver miner from Virginia City!”

At the Chicago Organic Theater Company, Mr. Post also did a popular children’s show, the “Cookie Crumb Club,” with songs like “Frog in the Kitchen Sink” and “Jellyfish Jamboree.”

He also performed an original play, “The Heart of Christmas,” at the Lakeshore Theater, now the Laugh Factory at 3175 N. Broadway.

In addition to “Reach Out of the Darkness” which is still heard on occasional television commercials, he himself appeared in one, in the late 1980s, for Wendy’s hamburgers.

He had fond memories of Chicago’s legendary folk music scene. In 2013, after the death of Earl Pionke, owner of the legendary Earl of Old Town, Mr. Post told the Sun-Times, “If I could turn back time, there is nowhere I would rather be than cross the front door. from the Earl of Old Town and heard Earl yell ‘Post!’ and he hugged me so tight I thought he was going to break my ribs.”

“He was married four times,” Postel said, “and I was his best man at three” weddings. “That was a permanent joke. She would say, ‘Bob is always my best man.’ ”

A celebration of Mr. Post’s life will be held from noon to 7 pm on Oct. 10 at Galena’s Turner Hall, according to his friend Lori Rische, with potluck, BYOB and music. At 3 pm that day, a pastor will pay tribute and friends will tell stories, Rische said.

Friedman said he also hopes to host a musical celebration in Chicago.

In his final moments, the singer was listening to “Three Soft Touches,” a song he had written about his grandparents Jeff and Louella Post’s courtship and Jeff Post’s death. He called it the “most sensitive song I’ve ever written.” Goes:

No words were heard in the silent room.

An old hand worn in a soft cotton dress

Now is when the weak fingers blinked

As if tasting the warmth of a warm open fire

A familiar touch for so many years.

to a city of light

A warm and peaceful planet

A place where I’ve never been

Then my grandfather was lifted by the cold dark wind

Years ago when they were still courting

Your own private way of saying ‘I love you’

To reunite them in the sweet land of love

And the grandmother did not move, she sat next to him in silence.

Early the next morning, with the family at breakfast

A love story that she felt we should hear

She said “Oh how I loved our first ten years together

Your daddy, the girls, laughter and joy

But I didn’t love him better

That our last years together

I tell you I know why they’re called golden years

And your grandfather’s last thoughts came straight from his heart

I know you didn’t hear a word in the room

But the three soft touches on my leg

He said ‘I love you’

So your grandfather went like a hawk to the moon.