The explosion of regional Mexican music arrived at Mexico City’s Estadio Azteca on Monday courtesy of Grupo Firme, who headlined the halftime show for the Monday Night Football NFL game in which the San Francisco 49ers defeated the Arizona Cardinals 38-10.

The return of the NFL to Mexico featured a week of celebration of pride that transcends borders, as well as the nexus between Mexican culture and American football with activities focused on art, fashion, music and youth soccer. As part of the League’s “Por la Cultura” campaign, music has been a focal point of the NFL’s marketing strategy, kicking off the season with a J Balvin concert and releasing a Por La Cultura mixtape with Yandel, El Alfa and Snow Tha Product among others. Latino football fans are the fastest growing demographic for the NFL and a significant audience that the league expects to grow in the coming years.

Grupo Firme, formed in the northern Mexican city of Tijuana, arrived at the so-called “Colossus of Santa Úrsula”, as the Azteca Stadium is also known, after a year of highly successful tours, including its concert in the Zócalo of the City de México last September that brought together an audience of 280,000 people, a series of presentations at Foro Sol, an important stage also located in the Mexican capital, and its main stage at Coachella.

“This is an achievement in our career, we are going ‘steadfastly’ as we say. The truth is that we did not think we would be part of an event as important as this beautiful night,” said singer Eduin Caz to Billboard Español. “It will be something historic, a different public will know us. They will listen to us and we will do our best”.

The Latin Grammy and Latin Billboard Music Award winners performed their hits “Ya supérame,” “El amor no fue para mí,” and “Gracias,” for the 78,000 NFL fans in attendance. This was the first Monday Night Football game played in Mexico City since 2019, after a two-year forced hiatus due to the Covid-19 pandemic. For musicians, the presence of the NFL in Mexico is a good opportunity for two communities to honor sports and music without language barriers.

“Something that we have realized and that we are very grateful for is that the public and the people who listen to Grupo Firme are increasingly bicultural. We have already seen people who do not speak Spanish singing at our concerts. It is a blessing for us that this is growing and that it opens the door for us to be at events like this one”, said singer Jhonny Caz.

The Mexican singer Sofía Reyes was chosen this year to interpret the national anthem of Mexico. She electrified the stadium as soon as she started singing the first verse. 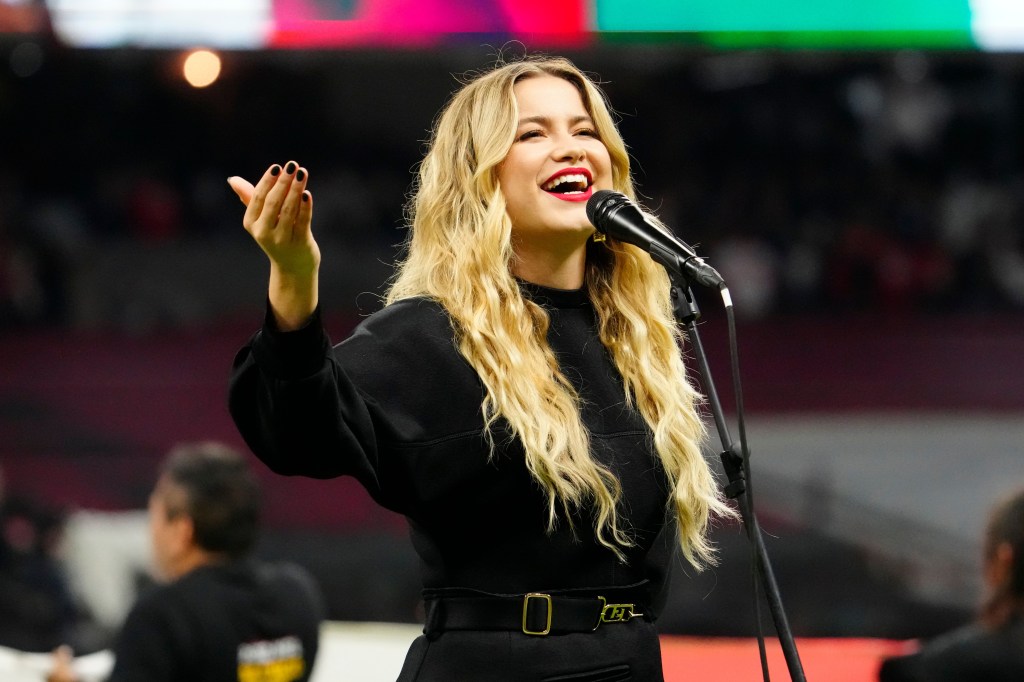 “For me it is an honor to sing the national anthem of Mexico and above all to sing it here in my country at an event like this. It’s crazy! I am happy and very grateful,” Reyes told Billboard Español before the game.

On the American side, the Mexican-American singer Marisol Hernández “La Marisoul”, from the musical group La Santa Cecilia, performed The Star-Spangled Banner, the National Anthem of the United States.

“This is my first time at the Azteca Stadium, singing the national anthem of the United States. I feel that my two worlds, my two countries, come together in a beautiful way and I cannot hide my feelings from this experience. For years at La Santa Cecilia we have tried to build musical bridges and I feel that tonight is a great example of this,” said Hernández.

The match in Mexico was the fifth and final of the 2022 International Series, which included three games in London and, for the first time, a game in Munich, Germany. Musical performances from the game at the Estadio Azteca on November 21 can be seen on the Mundo NFL YouTube channel.