LEVITTOWN, PA — A new biography of a renowned Levittown musician, who was murdered in 2011, will be unveiled at a music event at Bucks County Community College on Saturday, April 23.

The Danny DeGennaro Foundation, created in 2014, will hold its annual creative inspiration concert at the community college. The event will double as a fundraiser.

The concert will feature performances by DeGennaro’s former bandmates in his band Kingfish, his old friend and blues musician Mikey Junior, along with Hooters drummer David Uosikkinen and sets by aspiring Bucks County musicians Laura Fiocco and Katelyn Cryan. Comedian Anita Wise will act as MC for the concert.

Find out what’s happening in Levittown with free real-time updates from Patch.

DeGennaro, the foundation’s namesake, was a Levittown musician who was killed in his home on Crabtree Drive on December 28, 2011. He was 56 years old.

Find out what’s happening in Levittown with free real-time updates from Patch.

“There’s a whole universe of musicians out there and they all know each other,” said John Farmer, a New York Times bestselling author and former dean of law at Rutgers University. Farmer’s latest book, “Way Too Fast,” is a biography of DeGenarro. Farmer spent several years interviewing more than 100 people who knew the local musician to write the new book.

Farmer, who currently serves as director of the Eagleton Institute for Politics at Rutgers University-New Brunswick, met DeGennaro more than 30 years ago at one of the late musician’s regular hangouts in New Hope. Farmer, who had recently lost his wife, “was as low as I was in my life.”

“I was playing something that expressed how I felt, but made it beautiful,” Farmer recalled. “It was a turning point in my grieving process. He had a gift for bringing out the beauty in the saddest song.” 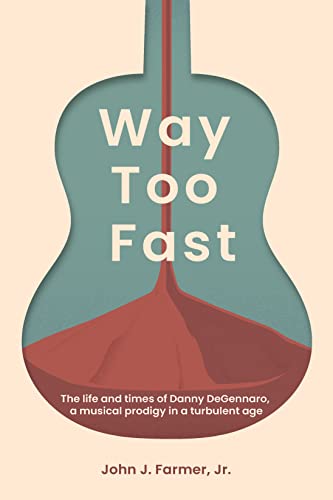 Farmer reconnected with DeGennaro in 2011 before his murder. After learning of DeGennaro’s untimely death, Farmer “was determined to do something about it.” An op-ed in a Philadelphia-area publication suddenly revealed the connection between music and DeGennaro’s personality, something Farmer found in the multitude of acquaintances he met while writing the book.

“I heard from people all over the country whose lives he had touched,” Farmer said. “It motivated me to write a story of his life that tried to capture the impact he had on other people’s lives.”

Many people close to DeGenarro felt the pain left by his murder. A friend, Robert Figlo, owner of Figlo Music Publishing, LLC, remembers meeting the musician in the ninth grade at Medill Bair High.

“He was already very popular, so we shook hands and were friends for life after that,” Figlo told Patch in an email. “I remember going to his house many times to see if he wanted to hang out, but he was practicing on his guitar.”

Figlo worked with DeGenarro in the ’70s and helped him get in touch with people in the music industry.

Like many friends, Figlo was devastated to discover that his old friend had been killed in a robbery just before New Years 2011.

“Even after all these years, it still hurts me to think about it; such a terrible way to end his life.”

Despite the pain of losing his friend, Figlo is excited about the release of Farmer’s new book. “I just hope he brings a new legion of fans to his music and maybe some kind of closure,” he told Patch.

Still an active member of the music industry, Figlo hopes that some of DeGenarro’s songs will be covered by new artists in an effort to solidify the impact he had on rock music.

“I think Danny will be remembered for [being] a guy who had enormous talent but was somehow quite happy to keep him here in good old Levittown, even though most everyone else thought he belonged on the big stage,” Figlo told Patch. weird!”

The foundation continues to honor DeGennaro’s legacy by awarding annual scholarships to music and art students at Bucks County Community College. The nonprofit group is working to bring a new scholarship to life, the TJ Tindall Music Scholarship.

Through its GoFundMe page, the foundation has already raised more than $6,000 of the $12,000 needed to create an endowment at Bucks County Community College to ensure the $500 annual scholarship continues in perpetuity.

“Biographies are tough,” Farmer said. “There’s always someone else to talk to. It’s hard to capture, I think, the essence of someone. It’s a very difficult project, but it’s worth it.”

Tickets for the event can be purchased online.