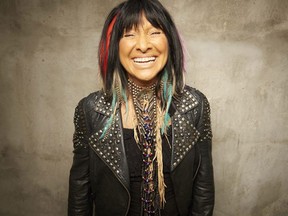 cineSarnia will screen the 2022 documentary Buffy Sainte-Marie: Carry It On at the Sarnia Public Library Theater on December 4 and 5. Brochure/Sarnia This Week Article Content

Directed by Winnipeg filmmaker Madison Thomas and featuring never-before-seen archival footage as well as interviews with contemporaries including Joni Mitchell, Robbie Robertson and Jackson Browne, the recently released film has already received significant critical acclaim, as well as garnering the Allan King Award for Excellence in Documentary by the Directors Guild of Canada.

Based on Sainte-Marie’s authorized biography, Carry It On takes audiences on a journey, examining her humble beginnings and meteoric rise on the 1960s folk scene, from her birth in Saskatchewan’s Qu’Appelle Valley to her breakup. forced from her birth parents as part of the ‘Sixties Scoop’, to her captivating career in music and art.

The film also highlights Sainte-Marie’s uncompromising and inspiring advocacy for First Nations people, and gives viewers an absorbing glimpse into her life, ranging from appearances on Sesame Street (she became the first woman to breastfeed in television), his Academy Award win (for his song Up Where We Belong from the film An Officer and a Gentleman), the immense influence of self-taught music on his peers, and his almost ethereal gift for songwriting (the Sainte-Marie’s songs were covered by everyone from Elvis Presley, Joe Cocker and Janis Joplin to Barbara Streisand and Glen Campbell. Carry It On also delves into the FBI’s efforts to derail it over the course of 20 years, demanding that stations radio stations don’t play your politically conscious tunes.

Audiences will greatly enjoy Buffy Sainte-Marie: Carry It On, said cineSarina’s Daniel DeVries, whether appreciating the artist’s gift for song, her dogged determination in the face of adversity or her sheer humanity.

“We chose (Buffy Sainte-Marie: Carry It On) obviously because it’s a Canadian movie, but also because our audience seems to like documentaries about people who aren’t entirely popular,” he said. “Buffy Sainte-Marie is an iconic folk singer who made a lot of her music huge, like Up Where We Belong and Unknown Soldier, just amazing stuff. On the other hand, she was suppressed by the FBI, she was squashed by all sorts of radio stations that weren’t fans of her political views…she’s a bit like Pete Seeger.

“Buffy Sainte-Marie is a little more political, a little more daring, and her leadership on issues like missing indigenous women is (inspiring),” he added. “A lot of people risk their mouth until it hurts, she risked her life and took the pain, which is a big difference.”

Buffy Sainte-Marie: Carry It On will be presented at the Sarnia Public Library Theater on Sunday, December 4 at 2 pm and Monday, December 5 at 7:30 pm

The Sarnia film winter season kicks off with a movie on the 8th and 9th of January. For more information, visit www.cinesarnia.com.

Postmedia is committed to maintaining a lively but civil discussion forum and encourages all readers to share their views on our articles. Comments may take up to an hour to moderate before appearing on the site. We ask that you keep your comments relevant and respectful. We’ve enabled email notifications: You’ll now receive an email if you receive a reply to your comment, there’s an update in a comment thread you follow, or if a user you follow comments. Visit our Community Guidelines for more information and details on how to adjust your email settings.