A memorabilia dealer and two other men have been criminally charged in Manhattan for possessing handwritten notes and lyrics from the Eagles’ 1976 hit album Hotel California that were allegedly stolen from singer Don Henley.

Glenn Horowitz, Craig Inciardi and Edward Kosinski were charged Tuesday with trying to sell the materials, worth more than $1 million, and lying to auction houses, potential buyers and police officers about how they obtained them.

Prosecutors said an anonymous author working on a possible Eagles biography stole the materials from Henley in the late 1970s and then sold them to Horowitz, a dealer of rare books and rock memorabilia, in 2005.

Horowitz allegedly sold the materials to Inciardi and Kosinski, who in turn tried to sell them at Christie’s and Sotheby’s auction houses or coerced Henley into buying them back. 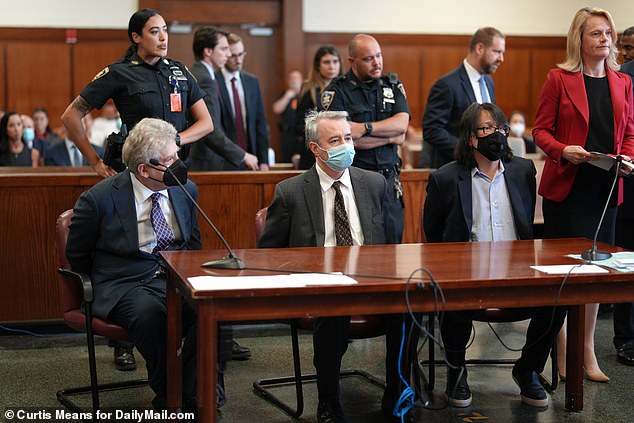 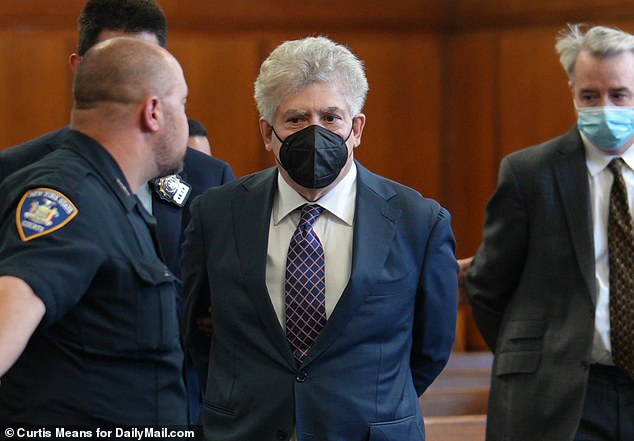 Prosecutors said an anonymous author working on a possible Eagles biography stole the materials from Henley in the late 1970s and later sold them to Horowitz (center). 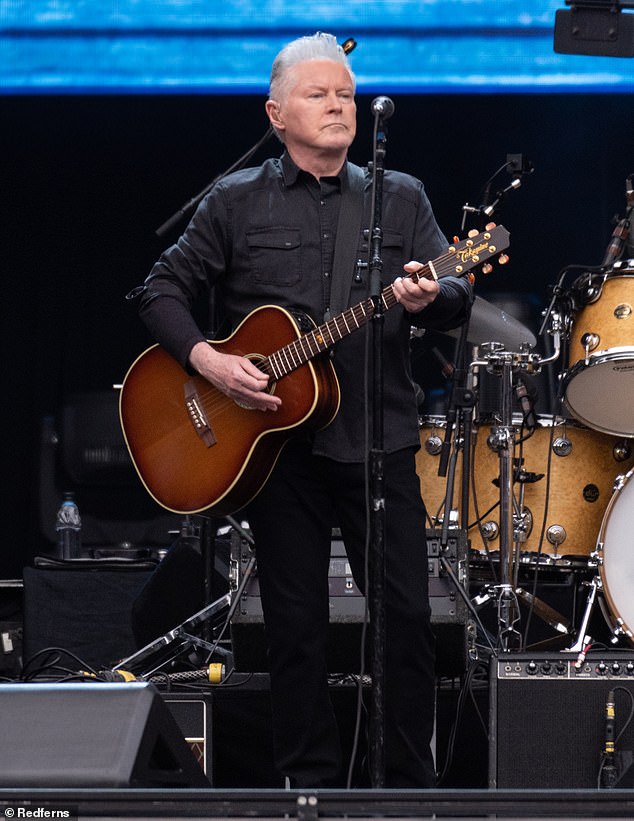 Don Henley of the Eagles performs on stage on June 22, 2022 in Edinburgh, Scotland

“They made up stories about where the documents came from and their right to possess them in order to make a profit,” said Manhattan District Attorney Alvin Bragg.

Bragg said the materials include lyrics from the songs “Hotel California,” “Life in the Fast Lane” and “New Kid In Town,” with many of the lyrics recovered through court orders.

The highest charge each man faces in the case carries a sentence of up to four years in prison.

All three men were released without bail and their lawyers insist they are innocent.

“The DA’s office alleges criminality where it does not exist and unfairly tarnishes the reputation of highly respected professionals,” defense attorneys Antonia Apps, Jonathan Bach and Stacey Richman said in a statement, vowing to “fight these unwarranted charges vigorously.” 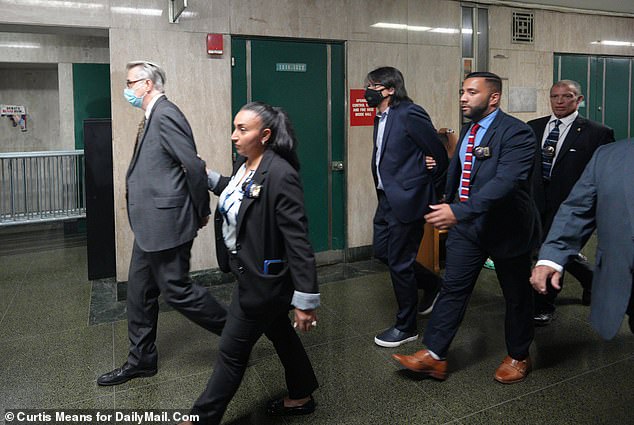 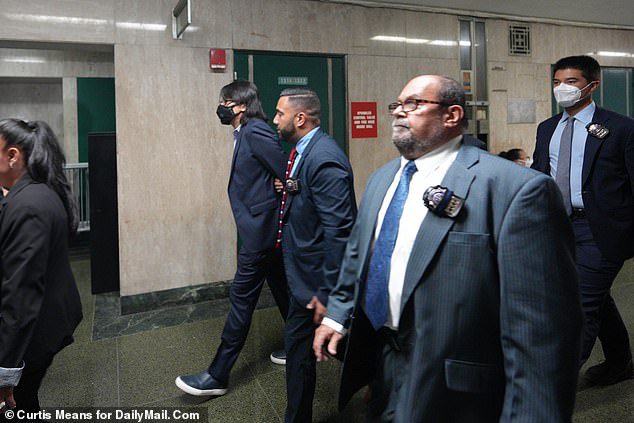 Edward Kosinski is escorted to Manhattan court for arraignment on Tuesday 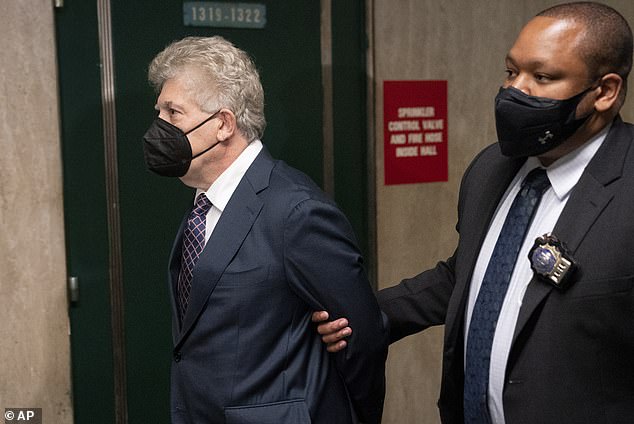 Glenn Horowitz, left, arrives in criminal court after being charged with conspiring with handwritten notes for the Eagles’ Hotel California album. 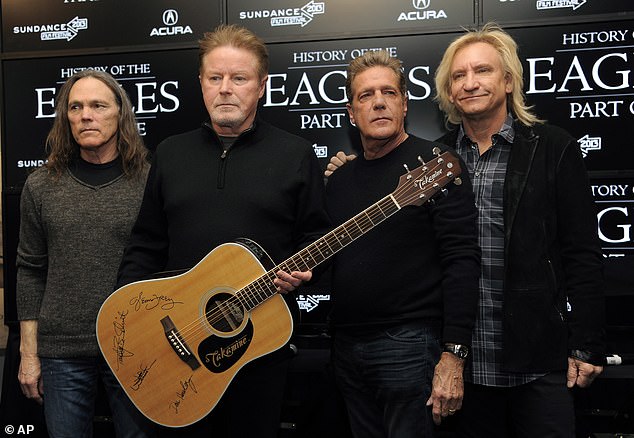 Members of The Eagles, from left, Timothy B. Schmit, Don Henley, Glenn Frey and Joe Walsh pose with an autographed guitar after a press conference in 2013.

Apps, which represents Kosinski, later called the charges “the weakest criminal case I’ve seen in my entire career,” characterizing it as a “civil dispute” over property.

“Despite six years of investigating the case, the prosecutor has not included a single factual allegation in the indictment showing that my client did anything wrong,” he said in a statement.

The trove of documents included Henley’s liner notes and lyrics for “Hotel California” and two other singles from that successful self-titled album: “Life in the Fast Lane” and “New Kid In Town.” Prosecutors valued the material at more than $1 million.

The writings are “irreplaceable pieces of musical history” and “an integral part of the legacy Don Henley has created throughout his 50-plus-year career,” former Eagles manager Irving Azoff said in a statement.

He thanked prosecutors for presenting a case that exposes “the truth about music memorabilia sales of highly personal stolen items hidden behind a facade of legitimacy.”

The chart-topping, Grammy-winning single ‘Hotel California’ is a touchstone of 1970s rock, with one of the era’s most memorable guitar solos capping off a musical history of being lured into a dazzling and mysterious hotel where ‘you can see when you want, but you can never leave. 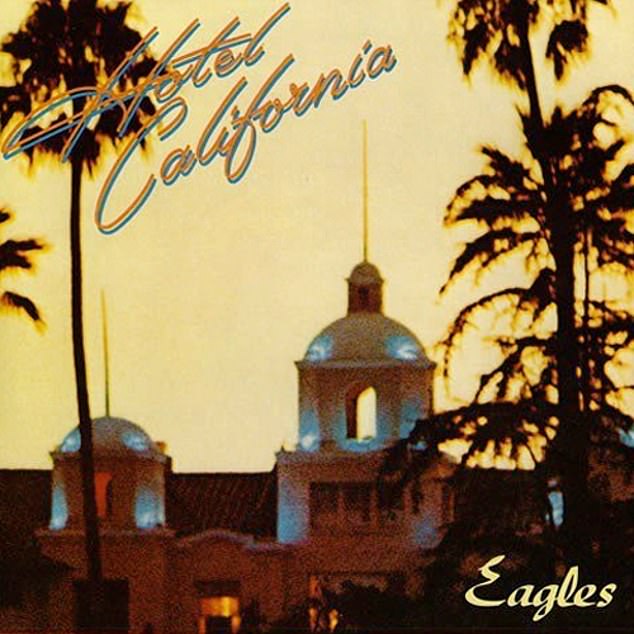 The hit single Hotel California, from the album of the same name (above), is a touchstone of 1970s rock, featuring one of the era’s most memorable guitar solos. 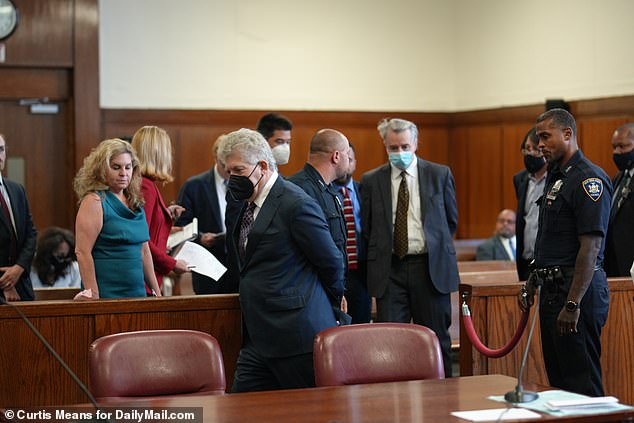 According to prosecutors and an indictment, Horowitz (front center) purchased the documents around 2005 from a writer who worked on a never-published book about the Eagles. 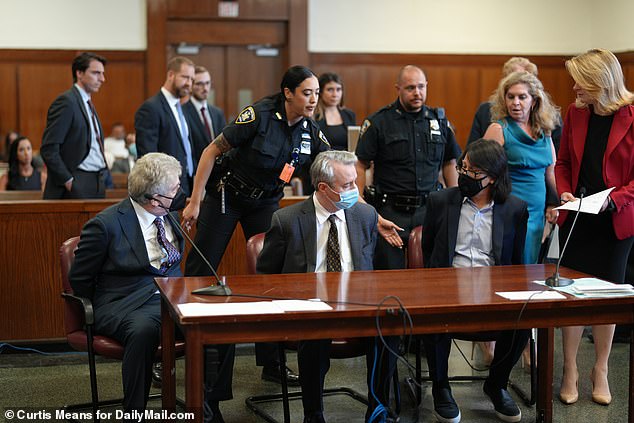 The three men were released without bail and their lawyers insist they are innocent.

Theories abound about the meaning of Hotel California’s lyrics. Henley has said that it is about excess and a dark side of the American dream.

The Grammy-winning album has sold more than 26 million copies since its release in 1976, making it one of the best-selling albums in history.

According to prosecutors and an indictment, Horowitz purchased the documents around 2005 from a writer who worked on an unpublished book about the Eagles in the late 1970s.

The writer, who is not identified in the indictment, gave a variety of explanations to Horowitz over the years about the origin of the documents.

In an email included in the indictment, the writer says Henley’s assistant sent them from the musician’s home in Malibu, California, after the writer picked them out.

In another, the writer found them lying in a backstage dressing room at an Eagles concert; in another, someone who worked for the gang gave them to him. 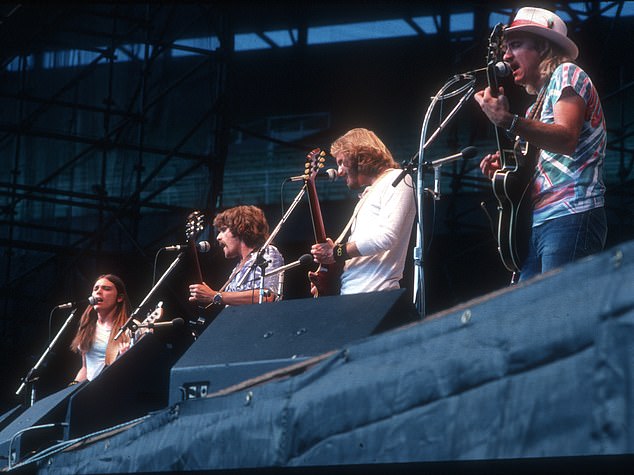 The Eagles are seen performing in the 1970s at an unspecified concert. 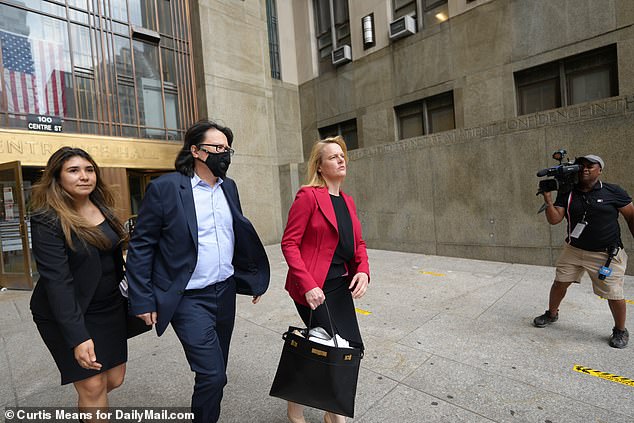 Kosinski is released on bail after pleading not guilty. His attorney called the charges “the weakest criminal case I’ve seen in my entire career.”

By then, Kosinski and Inciardi had bought the documents from Horowitz; Kosinski had put them up for sale on his online auction site, and inquiries about his origins were brewing.

In subsequent emails, Horowitz and Inciardi worked to turn the writer’s “explanation” into a communication. Eventually, an April 2012 email said he didn’t remember who gave him the documents. Kosinski sent it to Henley’s attorney, according to the indictment.

Later that month, Kosinski sold some “Hotel California” lyric sheets to Henley for $8,500, according to the indictment.

Inciardi and Kosinski then attempted to sell more Eagles documents to other potential buyers through Christie’s and Sotheby’s auction houses, and also offered to sell some to Henley, according to the indictment.

By 2017, with not only Henley’s attorneys but also the district attorney’s office asking questions, Horowitz asked the writer if he had obtained the materials from another founding Eagles member, Glenn Frey, according to the indictment. Frey had died the previous year.

“Once you identify GF as the source of the tablet, you and I are out of this picture forever,” Horowitz wrote in a follow-up email.

The writer then provided a note to that effect, according to the indictment.